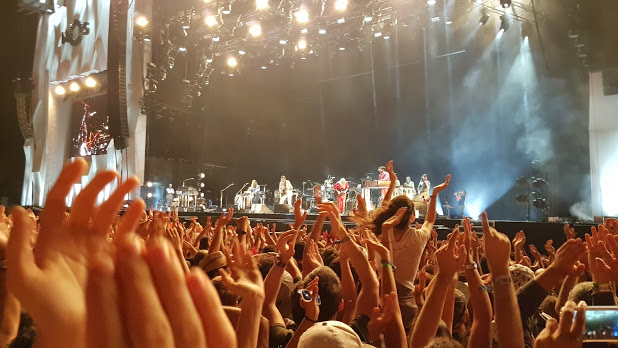 A beautiful city in so many ways

After booking a nice apartment to myself, found moments before boarding the plane to Lisbon I was on my way.

An uber from the airport took about 30mins, yet only cost several euros? Good start. The friendly driver who spoke near-perfect English dropped me off *close to* where I was staying and pointed me in a random direction. I figured a nice stroll at sunset through cobbled streets was a bit of a treat anyway.

Eventually, I found my apartment, it was in a decent location in Alfama, although you couldn’t get there by car – you had to walk a fair way.

After being in the country for less than an hour, cut your losses and head out to check how things work there, get to know the place…

Unfortunately for me, my phone died shortly after leaving my apartment, leaving me noooo idea how to get back home. I strolled for a few hours, found a local brew-house, and drank plenty of local beer while the nice barman charged my phone slightly.. I had a map again, and off I went! From there with a new false (ok, drunkened) confidence, I made friends with some randoms and ended up (with my rubbery arm) convinced to head to a nightclub. Why the fuk not?!

On the way, strolling the streets at 2:30 in the morning, we turned a corner to find an area rimmed with debauchery. There were people pissing on things while someone else threw up next to them. People grinding drunkenly on random legs, alcohol everywhere. I’m not sure, but I think that might be love. Apparently it’s more than ok to drink or do what you like, just about anywhere. Heaven.

This sadly just doesn’t happen where I live anymore. Sadly.

Eventually, we were in some dingy nightclub on the pink street, which was pretty good (after a lot of drinks)! What seemed like a short time went by, me being as old as I am, and the actual time being around 7 or 8am, I decided to call it a night and head home…  Now, when travelling to a new country, it’s important to get your bearings, know where you live, and charge your f**king phone – or mark “I live here” on a map and take it with you.. Yes, I was ‘a little’ intoxicated, but it took me three cab rides and about 2 hours of walking, and scaring several joggers and early-risers trying to ask for directions (sorry peeps, I wasn’t going to mug you – promise!) to finally figure out where I lived – which in my defence was in a rabbit-warren of twisted streets. A good nudge on a bottle of gin I had in the apartment was both thirst-quenching and helped calm my anxieties of being lost and homeless, when I finally got in..

After a deep but restless sleep in a new bed, I woke up early the next day in the late afternoon and thought I’d head out again (..after charging my phone).

Meeting people and having friends is important, thanks to a good friend back home, I was in touch with some lovely people, one of which turns out went to my school and lived a few streets from me growing up (Hi Mina!). Yes, it’s a small world we live in.. On a whim, and with my rubbery arm, I tagged along to the NOS Alive festival, and managed to scalp a ticket quite easily on the way in! It wasn’t really my cup of tea, but fun all the same. I did especially like the 400ml glasses of wine they sold there for a few euros.

If you get the chance to, something I can recommend is to time your travel to a country when they win a world cup football match. Lisbon came alive when they beat France. Every. Gawd-damn. Single. Person. was out in the streets. Women, men, pensioners, kids, babies, invalids, – every one.

It was a happy vibe of chaos that only the daft wouldn’t enjoy. There was a decent police presence, but they seemed more interested in smoking their cigarettes and chatting to one other rather than destroying fun.

A side-note to Police from Australia: – YOUR NOT THE FUN POLICE! If you feel like you are.., go travel to Portugal, learn from the popo there, and.. – STOP IT.

After a rather big night and not much sleep, I woke up with an international flight in less than 1 hour. No, I didn’t set an alarm clock, that’s (apparently) just how I roll. – When you like to cut things fine it’s good to be organised, book your flights correctly, know how to get to an airport and to book your ‘nice luggage’ a spot on the plane. When will I learn?! Miraculously, I made my flight –

Part 7: the reason for being organised..